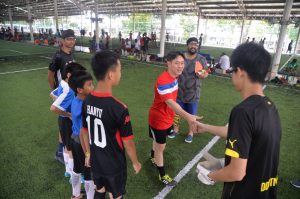 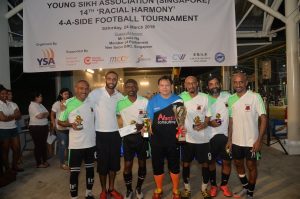 Every year, YSA organizes its ‘Racial Harmony’ 4-A-Side Football Tournament and this year was no different. On 6 April 2019, young and old donned their football attire to participate in the 15th edition of the ‘Racial Harmony’ 4-A-Side Football Tournament. The tournament sees various teams participating in one of the following categories – Junior, Veteran, Open, Ladies and Youth. It has a place for everyone, regardless of race, age and background.

This year’s tournament was graced by Minister of Education, Mr Ong Ye Kung. Mr Ong, dressed in his football attire, helped to kick off the event. Besides watching the matches, Mr Ong sportingly joined many of the participants in selfies including one with the YSA team.

The tournament was record breaking. It saw over 80 teams participating in the event, which is the highest number of teams this event as seen in its 15 year history. This year also saw the most number of ladies’ teams. It is safe to say that football is for everyone and helps to bring the community together. YSA also introduced technology into the game by using the Footsy App to help keep a tally of the scores and give team members live and immediate updates on matches, making this year’s tournament truly special and unlike previous years’.

The tournament aims to promote racial harmony and integration between individuals with teams consisting of members of different races, from various communities and backgrounds competing with each other. What better way to interact and get to know one another than through passion for the same sport! Besides the main tournament, the side activities such as target shooting and juggling competitions also provided players the opportunity to forge friendships and connections as they cheered each other on and supported one another. The delicious tea reception during the tournament also provided an opportunities for individuals to bond and interact with one another.

Although football is the highlight of the competition, the side activities, that were organized to continually engage the participants as well as provide mini challenges where they could walk away with cash prizes, were no less popular. During the target shooting competition, the players put their aiming skills to good use by hitting bottles places at various heights. However, the highlight of the side activities was the juggling competition. Although last year’s record of 951 juggles remains unbeaten, the record for the day was an impressive 665 juggles.

Through football, the side activities, yummy food and fun, this tournament brought together people from various communities, cultures, races and background.

Warning: count(): Parameter must be an array or an object that implements Countable in /home/customer/www/ysas.org/public_html/wp-content/plugins/archives-calendar-widget/arw-widget.php on line 154