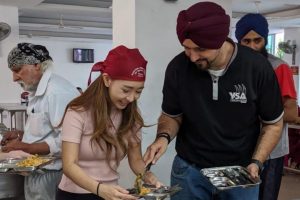 But increasingly heated online criticism of Ms Sheena Phua, an Instagram beauty and travel content influencer with more than 76,000 followers, led a group of young Sikhs to an unconventional response: they invited her to an informal tour of a gurdwara so that she could learn more about their traditions.

Mr Sarabjeet Singh, 34, the president of the Young Sikh Association (YSA), told The Straits Times his group’s gesture took some thinking through.

“Some responses to Sheena’s original post felt like a case of cyberbullying. (Although) there were some among us who were also a little uncomfortable with her initial post, we recognised it as an opportunity for us to reach out and engage,” he said.

“We still feel that we did not want an apology. Would an apology alone have done anything to improve awareness and understanding?”

Ms Phua, 29, has apologised for the controversial remarks she made on Instagram two Saturdays ago (Sept 21). She had posted a photo of two men wearing white turbans standing in front of her at the Singapore Grand Prix, and captioned it: “Dang! Two huge obstructions decided to pop out of nowhere.”

She later clarified that the word “obstructions” was intended to refer only to the height of the two men who were both taller than her, and so had been taken out of context.

She told ST: “I did some reflection and agreed with (some) people that although the video was not outrightly racist, it was insensitive and had caused a lot of distress to the Sikh community… I decided to take up the YSA’s offer to learn more.”

Last Saturday, a week after her divisive post, Ms Phua took up YSA’s invitation to a four-hour visit to the Central Sikh Temple in Towner Road, which she said “showed how peaceful the Sikh religion is”.

The YSA was formed in 2003 by a group of young Sikh Singaporeans to empower young Sikhs and enhance mutual understanding among people of different ethnic groups.

While at the gurdwara, Ms Phua was given an introduction to the Sikh religion and culture, and had questions like how Sikhs greet each other answered.

She also participated in sewa, or an act of service, by trying her hand at making chapati in the community kitchen.

She was also showed the Guru Granth Sahib, the principal scripture of Sikhism.

Ms Phua told ST she has a close friend who is Sikh but that she has never discussed religion and culture with her, saying: “I never really truly delved deeper into understanding the religious practices (of others). For many youths, the issues we discuss revolve around mundane issues like fashion, gossip and travel.”

She said that she hopes she will get more opportunities to interact with minority groups because “they have definitely contributed to (Singapore’s) growth as a society.”

Mr Sarabjeet, a civil servant, said he was glad Ms Phua took up YSA’s offer, hoping that “all of us have walked away as better people”.

He said: “She demonstrated humility, kindness, curiosity and sincerity, and that is more important to us.”

Warning: count(): Parameter must be an array or an object that implements Countable in /home/customer/www/ysas.org/public_html/wp-content/plugins/archives-calendar-widget/arw-widget.php on line 154